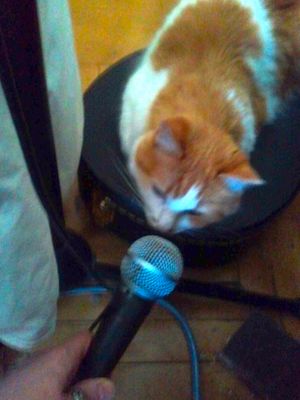 9/18/13:  Lacy and Tim Daoust appeared on ReW StaRR's superfab internet show ReW and WhO? at Otto's Shrunken Head in NYC! Watch the full segment (performance and interview)  below, or scroll down for just the interview:

3/23/13:  Go here to listen to Lacy's visit with Hugh Moore and the rest of The Fly Over Zone gang on 88.3 WQNA Springfield, talking songwriting, choreography, bird-related things, Martha Graham, Michael Jackson, non-nonsense words, and lots of other fun stuff... you'll find it on the Fly Over Zone's archive page -- Hour 2 of Show #493, followed by a very interesting interview with Lou Harrison (sister of George Harrison) in Hour 3.
3/2/13:  Listen below to Lacy's interview with the one and only groovetastic MisterG of greenarrowradio on 91.7 WSUM Madison... "the Snake on the Lake":